Below is a narrative on the process we used to make the plug and mold for the longboard skateboard pictured.  Rather than do a strict how to article I decided to that a narrative may be more beneficial as there is no “one” right way to do you plug and mold work and each project is a little different.  We recently did another longboard skateboard after this one and that one we did differently using CNC technology and different coatings.

This is an example of how to build a plug and mold for fiberglass or composites.  In this case we were building a longboard skateboard mold from scratch.

We began by cutting out the outline of the shape we wanted from a block of urethane foam (Last-a-foam) and then shaping in the bottom contours of the skateboard that we desired. 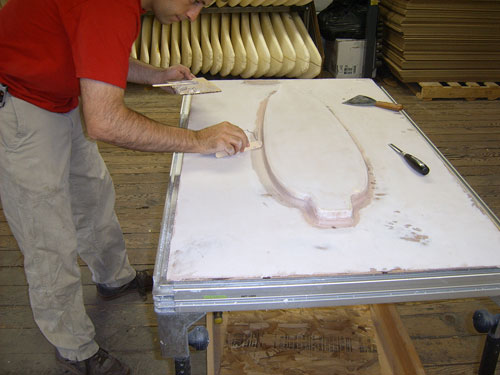 This was then mounted onto a sheet of plywood to provide the flange area that we would need on the finished mold to accommodate vacuum bagging materials.  This particular board is designed around resin infusion technology and the large flanges make it very easy to fit the resin brake area and inlet and flow media on the part.  From past experience we learned that without ample flanges it is more likely that you’ll have problems getting the bag to seal and to get good wetout. 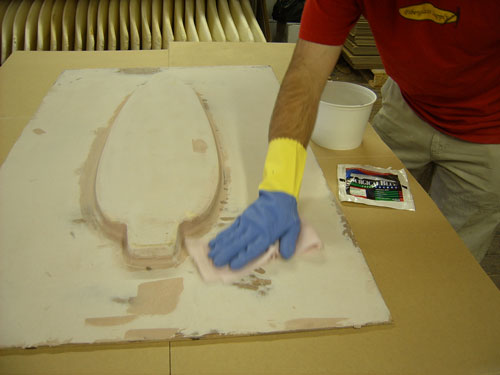 After mounting the foam plug to the plywood we covered the whole thing with a layer of 4oz fiberglass cloth.  This gives us a hard shell to work from over the foam and plywood and reduces the probability that we would damage the foam plug.  I found the 4oz glass to be a little on the light side and would probably use a heavier cloth or even chop strand mat next time.

Next the part was covered with a polyester body filler putty.  We stock and use 3M lightweight body filler.  This was primarily to fill the weave of the fiberglass cloth and provide a surface to fair from. 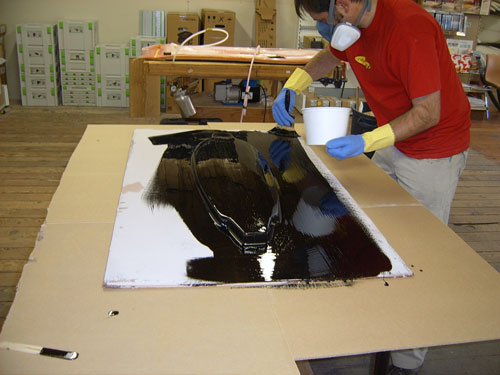 This was sanded, checked, re-puttied, faired, etc until we were happy with the results.

As part of the process we also added a fillet to make a transition from the mold flange to the body of the part.  This was done using body filler and radiused tools, such as tongue depressors. 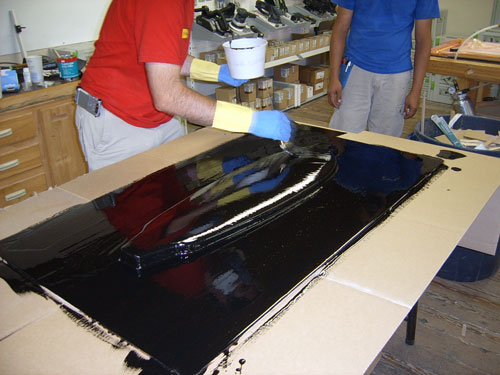 Everything was sanded to 120 grit in preparation of an application of gloss resin.  Because gloss resin is viscous there is no need to go finer than 120, it will fill the scratches just fine.  Before coating the plug it was wiped down with a tac rag.  We use Surgical Blue tac rags because we haven’t had any issues with them causing fish eyes or other surface contamination issues.  We have had issues with other brand tac rags.  Some people will use clean white cotton rags and solvent wipe.  Whatever you do do not use a blow gun to blow it off- that will just redistribute the dust back onto the part (and other areas of the shop, you, etc). 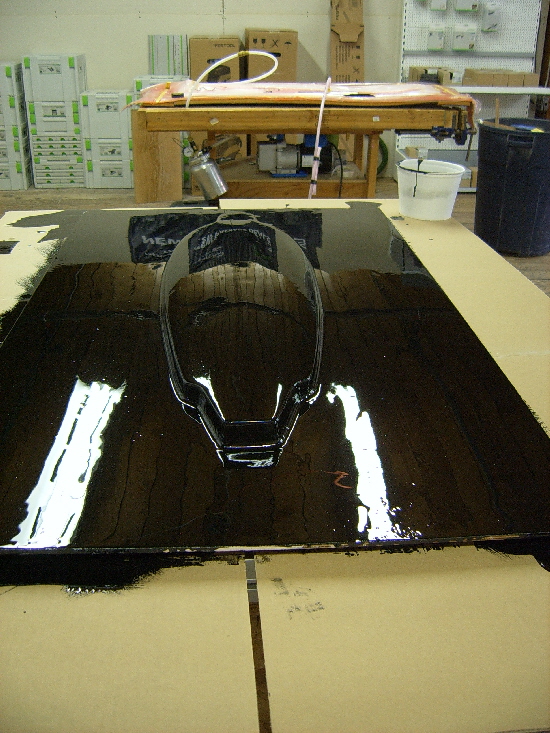 We used gloss resin to coat the plug because it cures to a hard film that can be wet sanded and buffed to a high gloss.  We added black pigment to the resin so that we would be able to see the quality of the surface in the light and to hide the visual busy-ness of the underlying materials.

After mixing the pigment into the resin, usually 3% pigment by volume will give you opacity (about 4 oz per gallon).  The resin was strained to remove any impurities then initiator is added to the resin. 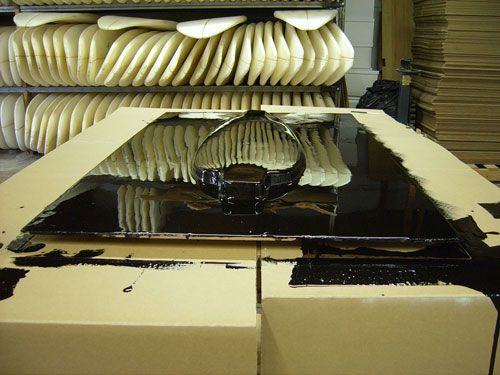 The brushing technique that was used here is the same as the one used to hotcoat a surfboard.  The resin is poured out and spread over the plug, then using quite a bit of pressure is brushed at opposing 45 degree angles to even out the layer of resin on the plug, finally it is lightly brushed along 1 axis to smooth it out.  From there gravity takes over and the resin will level out.  As it cures wax will rise to the surface and the surface sheen will dull.

Here is a video showing the hotcoating technique:

After it is fully cured it is wet sanded and buffed.  Keep in mind that the surface of you mold will be no better than the surface of your plug.  Here is where it is more important to pay attention and put in the extra work.

We usually sand to somewhere between 600 and 1500 grit before buffing, it just depends on the quality needed out of the part.  For buffing we use 3M Superduty, Finesse-it II, and/or our surfboard rubbing compound. 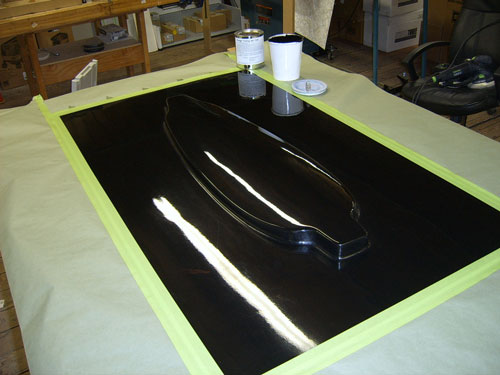 Once the plug is wetsanded and buffed to perfection it is time to apply mold release to it so that it will come apart from the mold.  For plug to mold work Partall #2 wax and Partall #10 PVA are a good combo.  For limited production a standard paste wax type release such as Meguair’s 88, Honey Wax, or TR High Temp work well.  For regular production we prefer semi permanent releases such as Chemlease 70-90.  Semi permanents aren’t recommended for plug to mold work because they are too slippery and have a tendency to pre-release. 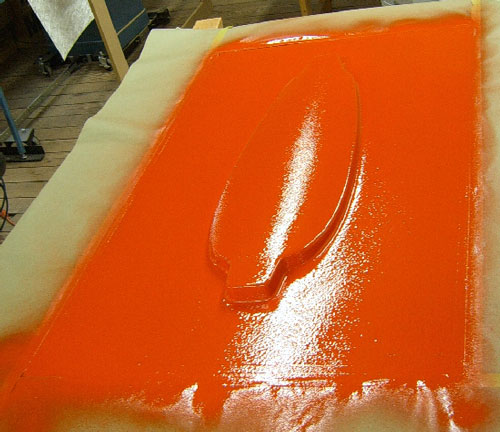 After the release agent is applied gelcoat is sprayed over the plug.  In this case we used orange tooling gelcoat and sprayed it with the G-100 gelcoat spray gun.  Normally you want to build the mold with a color that you will not build the part out of that way when you are spraying gelcoat for the part you can tell if you have any thin spots.  You also want to use a tooling specific gelcoat as it is formulated to take the rigors of part building.

Here is a video clip of spraying gelcoat over a prepared plug:

Once the gelcoat tacked up we put down the first layer of mat.  This layer is crucial, it needs to be void free and adhered very well to the gelcoat. It should also not be too resin rich, especially in detail areas.  This is allowed to cure fully and then followed up with 2-3 layers at a time until final thickness is reached.  With this particular mold we do 10 layers of 1.5oz chop strand mat which nets us out at about ⅜” thick.  Typically we end up using between 2 and 2.5 gallons of resin. 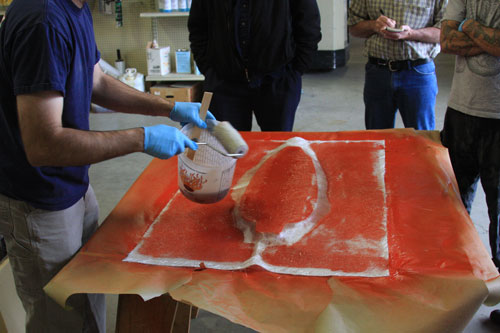 After demolding the mold from the plug and trimming off the excess we applied 5 coats of Chemlease 70-90 to the mold (only two coats where the bag tape goes, this stuff is slippery) and began pulling parts. 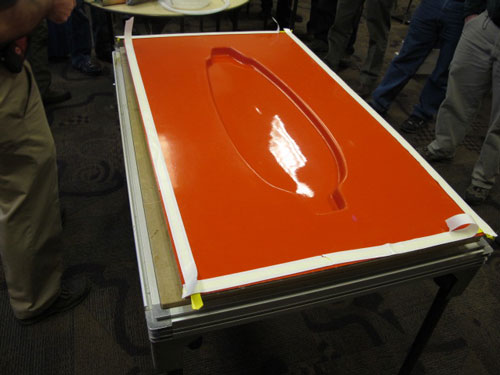 Here is a video clip of a part being demolded from the mold: