Tips for Infusing with Epoxy Resins 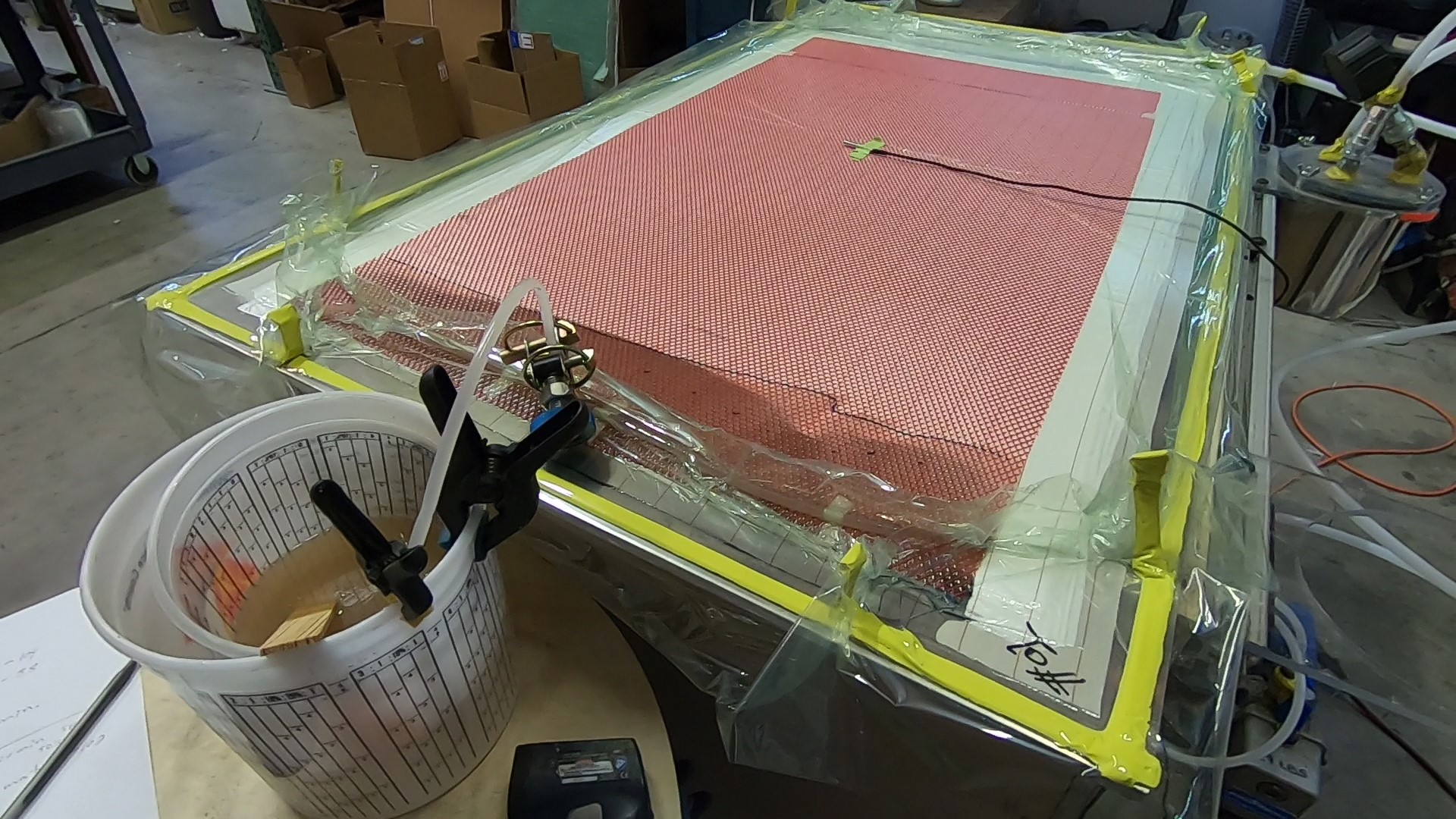 While the basics of infusion still apply; pressure, viscosity, and porosity; infusing with epoxies introduces some different concerns and techniques than infusing with polyester or vinylester resin systems.

Epoxies generally have higher viscosities at room temperature than polyester resins designed for infusion. Epoxy resins however can be thinned by heating them and drop dramatically in viscosity with just moderate heat.  We’ve found that pre-conditioning, or heating, the resin to between 80 and 100F is enough to thin it for infusion.

In addition to heating the epoxy it may also be necessary to heat the mold.  If you mold and laminate are at a lower temperature as the epoxy enters the laminate in a thin body it will quickly cool and the viscosity will rise slowing its progress.

To compensate for the viscosity difference spacing between feedlines may also need to be closer than what you would find on the same part being infused with a lower viscosity polyester resin.

Epoxies unlike polyester resins use fixed speed hardeners and you cannot simply add more hardener to make it go faster or less to slow it down.  A general rule of thumb for cure and gel speeds is that for every 18 degrees F that you change the resin temperature you will either cut in half the gel time or double it.  For example if my resin at 77F(the temperature most data sheets use) with a fast hardener has a gel time is 30 minutes then at 95 F I will have approximately 15 minutes to gel, in that case unless the part is small I may want to switch to a slower hardener. With most resin systems you can blend different speeds of hardener to get a custom gel time, before doing this consult with the resin manufacturers data or give us a call, to verify that it is OK with that specific system.  Also some epoxy manufacturers sell additives to speed up the cure, although generally because you are heating the resin to infuse it you’ll usually want to slow the gel rather than speed it up.

The effect of temperature on the resins can be used to your advantage, we often use it to shorten cure cycles and increase throughput.

Degassing involves putting the pot of mixed epoxy and hardener in a vacuum chamber and applying vacuum to release any gas that is held in solution or bubbles that were introduced during mixing. Mix the epoxy, apply full vacuum for 3 minutes, let stand for 30 seconds and slowly release the pressure.  We found that this produced better parts than batches that we did not de-gas.  This does add time to the process and needs to be taken into account when working up your hardener profile.

We have heated up the resin to make it flow, used a slower hardener to give it enough time to wet-out at a higher temperature, and now everything is infused and we are waiting impatiently to see how it all turns out.

Again epoxies respond wonderfully to heat, a moderate increase of 18 degrees will cut in half cure times, so for example if our gel time was 60 minutes at 77F and 30 minutes at 95F, at 113F it becomes 15 minutes.  Cure times behave in the same way, and most data sheets will give you initial cure times and post cure schedules. So if my resin has a 3 hour cure time at 77F at 113F it should be ready to demold in 45 minutes.  The caveat here is that you want to verify these times with some testing and stay below the heat deflection temperature (HDT) of the epoxy and most epoxies have relatively low HDTs (120-140F).

With longer gel times the seal, which always vitally important becomes more so.  The longer there is between wet out and cure the more likely it is that that any possible leaks will leak into the part, this can be especially vexing on parts with a double sided finish.  Make sure to perform drawdown tests and verify that you have a good seal before infusing. A standard drawdown test is a good way to do this.